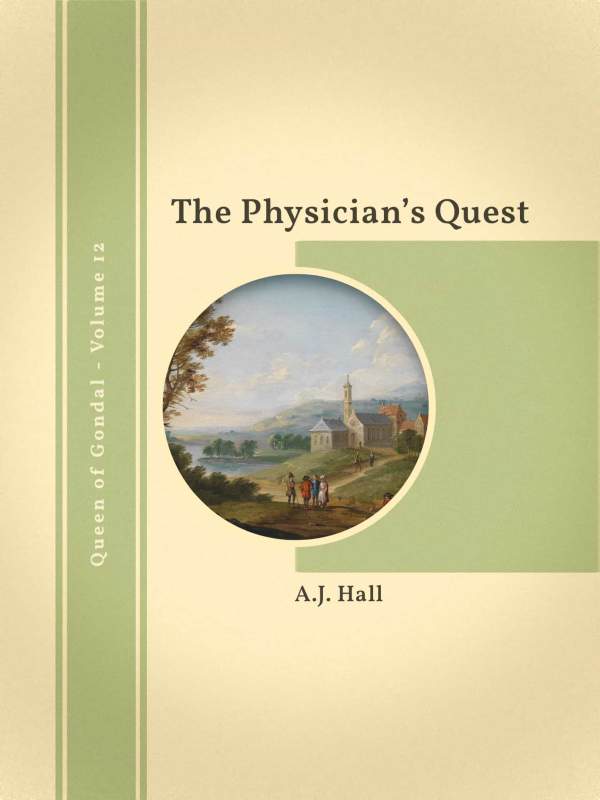 The Physician’s Quest is the twelfth in a series of Queen of Gondal books and is a quasi-historical AU of the BBC Sherlock series set (more or less) in three fantasy kingdoms devised by the Bronte children. You might like to refer to their suggested reading order, family trees & series information.

Sherlock, Crown Prince of Gaaldine, is a marked man. His brother has proclaimed him an outlaw and decreed that those who knowingly assist him will share his fate. But, five years ago, under the guise of the consumptive Mr Verney, Sherlock rescued the life-savings of one Martha Hudson, widow, in the town of Sancta Maria inter Prata. Martha Hudson always repays her debts. Even when that involves facing up to Lord Moran, the most ruthless assassin in the three kingdoms.

A dedication to Kalypso, on her birthday.

The original central cover image is based upon a photograph of the oil painting [‘Flusslandschaft mit einem Dorf und Wanderern’]( “Visit this website”) by Jan Pieter van Bredael (1683–1735). The fonts used in this book are from the Source Serif Pro font family by Frank Grießhammer.

This novella is rated Teen (15). You might also like to consider other books set in the Sherlock fandom or read more books in the Queen of Gondal series.